The fourth Thursday in November – Thanksgiving – is a pretty universally loved holiday here in these great United States of America. Regardless of religious or political affiliation, families – both blood and chosen – come together around a table to eat delicious food and reflect on the things we’re thankful for. (This year, we are particularly thankful that the election cycle will be over and that the in-fighting between boisterous aunt Betsy and sassy Aunt Sally might be coming to an end… at least until 2020 rolls around).

Thanksgiving is also a holiday steeped in tradition and history. The story of the Pilgrims arriving in Plymouth, nearly starving to death, and then befriending the neighboring Native American tribe is one of hope, trust, and learning to be compassionate for others. Throughout the years, however, the method of honoring the legacy of the Pilgrims and Native Americans has become a bit – well, diluted. In some families Thanksgiving is about football, food, and making it through the day rather than spending meaningful time with family and focusing – even if it’s only for a few moments – on the things for which we are truly thankful.

On this Thanksgiving, after an election year that tore our country apart, try to get back to the root of it all. While it isn’t necessary to make a huge show of announcing what you’re thankful for, we’ve rounded up a few crafts that will help do the trick (and that will keep the kids out of the kitchen while you put the finishing touches on grandma’s legendary apple pie). We’ve also included an easy-peasy dessert, so that those little fingers can feel accomplished on the big day. 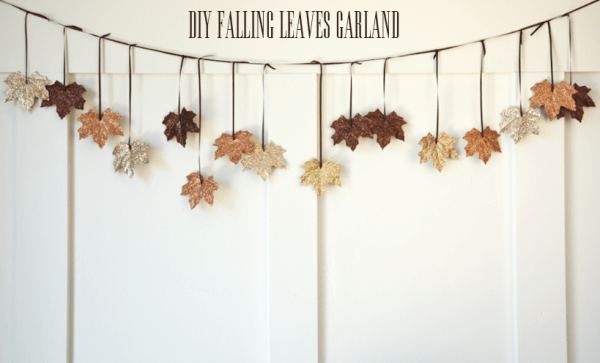 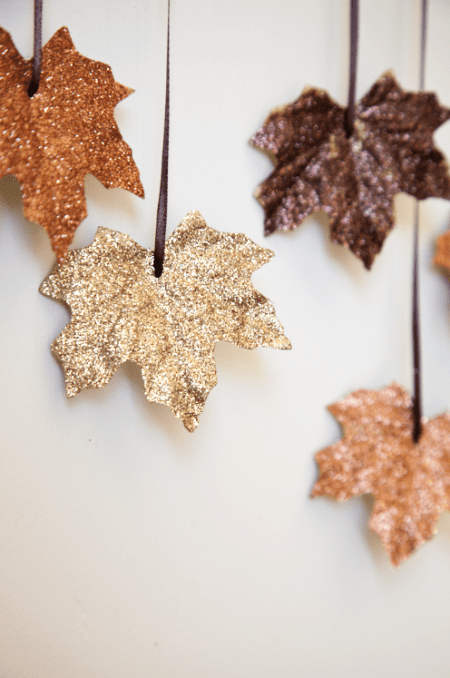 This garland will look absolutely stunning hanging from the mantel, in a doorway, or even over the dining room table (although you would run the risk of getting glitter in your food). The process for putting these together is simple – purchase a bag of artificial leaves from your local craft store (using real ones would probably result in them crumbling, but you could attempt it), coat them in glue, and then dip them in glitter. Hang them at varying lengths and heights from a piece of string – either by their stems or by punching a hole in them and running some string through them – and voila!

These adorable printables – in and of themselves – aren’t necessarily crafts, but you could absolutely create your own fairly easily using a program like Canva. If you’d rather keep it simple and print these out, you can arm the kids’ table (or heck maybe even the grown-ups’ table!) with crayons and colored pencils and let your guests get to work filling in what they’re thankful for and dressing up their own placemat prior to the meal. Then, at the beginning of the meal you can all go around and share what you wrote down – or you can simply leave them at everyone’s seat and everyone can try to catch a glimpse as they seat themselves.

Everyone loves Oreos, and chocolate pretzels – and those two things combined add up to an inexpensive, kid-friendly dessert that’s almost too cute to eat. Emphasis on the word “almost.” To create these adorable little guys, melt some chocolate chips with vegetable oil. You can purchase fudge covered oreos pre-made, or make your own. Using the melted chocolate like glue, stick the pretzels to the back of the oreos, and stick some candy corn (for the beak) and candy eyeballs (… for the eyes, obviously) to the front. Pop them in the refrigerator to cool for a bit and you’ll have delicious and adorable treats for dessert!

These are also great crafts for doing in class with students or during an after-school enrichment program. Remember, Pay4SchoolStuff.com is the perfect tool for managing payments to after-school programs, fundraising endeavors, class activity funds, and for allowing parents to sign forms and sign up to volunteer.